RF engineer Tero Ranta has worked at Peregrine Semiconductor for almost 10 years, and he’s had a truly remarkable career. Tero has over 15 patents in cellular handsets and has published more than 10 technical papers with over 50 citations.  He joined Peregrine after working for Nokia in Finland, and he holds a master’s degree in telecommunications technology from University of Turku in Finland.

He’s currently working on some exciting projects at Peregrine, including power amplifier (PA) development. On top of that, Tero recently wrote a chapter for the book “Tunable RF Components and Circuits—Applications in Mobile Handsets.” We caught up with him to ask him a few questions about the chapter— and hear his ideas about the future of impedance tuning. 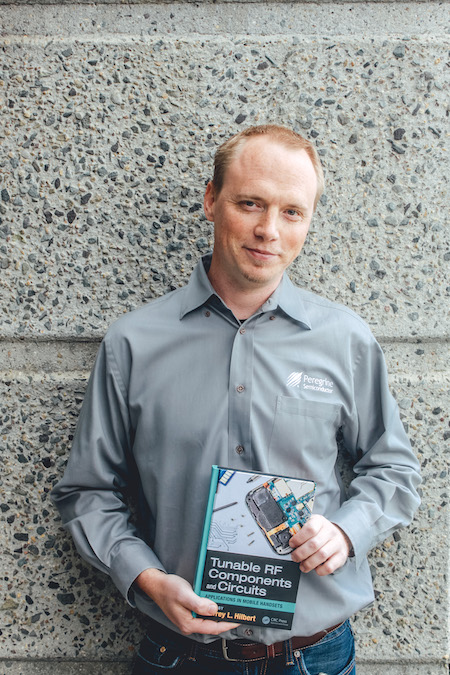 Interviewer: Tero, could you tell us a little about the book “Tunable RF Components and Circuits— Applications in Mobile Handsets” and how you became involved?

Tero: Ever since I came to Peregrine, I have worked on tuning. Peregrine is one of the pioneers in the field and was part of a tunable RF working group organized by the International Wireless Industry Consortium (IWPC). One of the members, Jeff Hilbert of Wispry, invited Peregrine to write a chapter on semiconductor and silicon-on-insulator (SOI) CMOS technology for tuning. There are a lot of different ways that companies go about tuning, but Peregrine uses SOI CMOS technology for impedance tuning.

Interviewer: Your chapter itself is a technical dive into the performance metrics and design trade offs in RF CMOS impedance tuners. Could you summarize your main points for us?

Tero: There’s a lot of technical information in the chapter, but the main point is that you can improve the performance of mobile devices by using tuning. And you can do it by using SOI technology, which is what we use at Peregrine. In the beginning, people thought that it was impossible to use SOI or CMOS and that it didn’t make any sense. But over the years, Peregrine has proven that it’s actually doable. Basically, the chapter summarizes the technical details behind how you use SOI CMOS for impedance tuning.

Interviewer: The book is a collaboration between several key players in tunable circuits. How has that market progressed over the last few years?

Tero:  Several years ago there was a lot of hype around using tunable capacitor technology and complicated closed loop tuning algorithms to improve performance of the cell phone antenna, with market projections of several billions of dollars to support the next generation 4G LTE smartphones with dozens of bands and high data rates. What ended up happening was that majority of cell phone antenna tuning was implemented using simpler and more cost effective RF switch-based technology. Impedance tuning was more suitable for more complex implementations, such as tunable filters and power amplifiers for cellular carrier aggregation (CA) as well as non-cellular applications such as M2M (machine-to-machine) and IoT (internet of things).

Interviewer: Could you give us some examples?

Tero: You can use tuning in set-top boxes, test-and-measurement equipment, cable modems and all kinds of things. Basically, wherever there is some sort of high frequency or RF signal going through, it’s possible. You can tune to improve the system performance. It’s been kind of disappointing that the market didn’t really take off the way everybody thought. For Peregrine, it wasn’t a big problem because we had other businesses as well. Our success wasn’t dependent on tuning, but there were a lot of companies out there whose only focus was tuning.

Interviewer: Only on tuning?

Tero: Yes, these companies were only working on tuning. They were using MEMS (micro-electro-mechanical systems) technology or BST (barium strontium titanate). Since then, however, those companies have mostly been acquired, went bankrupt or it just didn’t work out. The SOI CMOS approach is still one of the most commercially viable approaches, while many of the other more exotic technologies are being phased out. Tuning may be used in the power amplifier, duplex filter or other areas in the RF front end, not necessarily in the antenna itself. Antenna tuning was one of the first, and one of the most difficult applications of tuning. But there are many other places in the 4G and 5G smartphone RF front-ends that will require tuning going forward to optimize system performance.

Interviewer: On that topic, do you have any predictions for the future of impedance tuning?

Tero: Like I said, there’s going to be a lot of applications in phones and other places. We just have to figure out how to use it. Peregrine has a good head start, because we’ve been working on tuning for so long.

Interviewer: What about you personally? When did you first become interested in impedance tuning?

Tero: It was back in the early 2000s. At that time, there weren’t devices that could meet the requirements to implement the impedance tuning in mobile devices in real time. That’s the difference. You can do impedance tuning using passive components, but you can’t change the tuning on the fly. And I think that’s the whole point—being able to tune in real time.

Interviewer: Would you say that played into why you were attracted to tuning? Because it wasn’t possible at the time?

Tero: Yes. It was a challenge, and I knew that Peregrine had technology that could probably do it. I felt like it could be done. Everybody else thought that it couldn’t. So I decided what the hell, I’m going to try.

Interviewer: How long have you been working with RF CMOS technology then?

Tero: I started working on RF CMOS technology for mobile RF front-ends back in 2003 at Nokia. They recognized early on that CMOS will revolutionize the design of cellular devices, while others were still using older III-V technologies such as PIN diodes and gallium arsenide (GaAs) integrated circuits. The topic of my master’s thesis was to determine the requirements of RF front-end technology for 3G cellphones. At that time Peregrine was pioneering the development of the kind of RF CMOS technology that we thought could meet the requirements and that was how I came to know the company.

Interviewer: How do you think RF CMOS compares to competing technologies, especially in regard to impedance tuners?

Tero: I believe SOI CMOS is the most commercially viable technology for high-volume products. With high-volume products, it has to be inexpensive, small and be able to be manufactured in large quantities. Some of these other technologies, for example MEMS or BST, are very exotic technologies and are more expensive. That’s why I like using SOI or CMOS technology, because it enables mass production. Everybody’s using CMOS in phones anyway. You can basically implement a new function using technology that you already have. These other technologies, MEMS and BST, they’re not being used in phones. You’re introducing more risk that it might not work. Also, you have to ask yourself the question,  “is it worth doing it in a complicated way, if you can do it in an easy way?”

Interviewer: Understandably. For those interested, where can people get a copy of the book?

Tero: The book is available online from Amazon. You can also order it from the publisher, CRC Press.

Interviewer: Thanks for your time, Tero.