SAN DIEGO – Sept. 30, 2015 – Peregrine Semiconductor Corp., founder of RF SOI (silicon on insulator) and pioneer of advanced RF solutions, announces its UltraCMOS® monolithic phase and amplitude controller (MPAC) was named a finalist in the Elektra European Electronics Industry Awards. The first product in the MPAC family, the PE46120, is nominated in the Semiconductor Product of the Year – Analogue category. Winners will be announced at an awards ceremony on Nov. 24, 2015 at The Lancaster London. 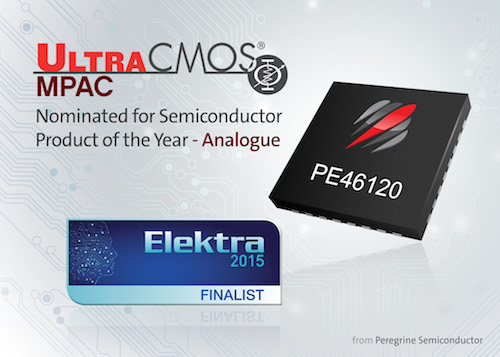 “It is an honor to be named a finalist in the 2015 Elektra Awards,” says Mark Moffat, managing director of Peregrine Semiconductor Europe. “The MPAC product family is an excellent example of the intelligent integration capabilities of Peregrine’s UltraCMOS technology. The controllers provide RF system designers with the flexibility and required performance to precisely control phase and amplitude, while also achieving integration that other technologies, such as gallium arenside (GaAs), could never achieve.”

ABOUT PEREGRINE SEMICONDUCTOR
Peregrine Semiconductor Corporation, a Murata company, is the founder of RF silicon on insulator (SOI) and is a leading fabless provider of high-performance, integrated RF solutions. Since 1988 Peregrine and its founding team have been perfecting UltraCMOS® technology—a patented, advanced form of SOI—to deliver the performance edge needed to solve the RF market’s biggest challenges, such as linearity. With products that deliver best-in-class performance and monolithic integration, Peregrine is the trusted choice for market leaders in automotive, broadband, industrial, Internet of Things, mobile devices, smartphones, space, test-and-measurement equipment and wireless infrastructure. A Murata company since December 2014, Peregrine holds more than 200 filed and pending patents and has shipped over 2.5 billion UltraCMOS units. For more information, visit http://www.psemi.com.