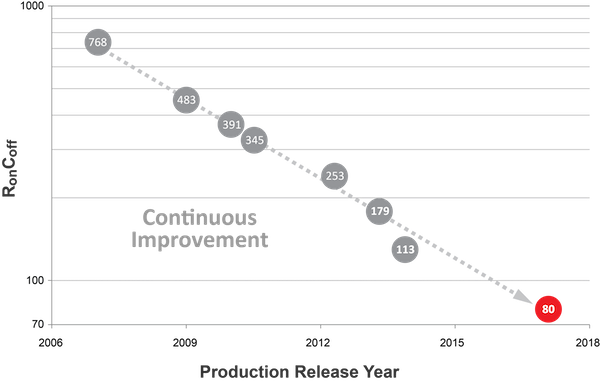 A key metric for RF switching, RONCOFF is Peregrine’s performance benchmark for each new generation of the UltraCMOS platform. RONCOFF is a ratio of how much loss occurs when a radio signal goes through a switch in its ON state (RON, or on-resistance) and how much the radio signal leaks through the capacitor in its OFF state (COFF, or off capacitance). With each new UltraCMOS generation, Peregrine targets a 20-percent improvement in RONCOFF. UltraCMOS 12 technology surpasses this target and sets a new industry standard for RONCOFF performance.

“For nearly three decades, Peregrine’s UltraCMOS technology platform has been at the forefront of RF SOI performance – especially for RF switching,” says Alain Duvallet, vice president of RF process technology at Peregrine Semiconductor. “This legacy continues with today’s introduction of the UltraCMOS 12 platform, which boasts the industry’s best RONCOFF performance. And this technology breakthrough is on a 300 mm RF SOI wafer!”

UltraCMOS 12 technology, like the two generations prior—UltraCMOS 10 and 11, uses a custom fabrication flow from GLOBALFOUNDRIES. This collaboration between Peregrine and GLOBALFOUNDRIES yields industry-leading advancements. UltraCMOS 11 technology, introduced in July 2015, was the industry’s first RF SOI 300 mm platform, and UltraCMOS 10, introduced in October 2013, delivered the industry’s best RONCOFF performance, at the time.

“Our joint development with Peregrine Semiconductor continues to produce remarkable results, and UltraCMOS 12 technology is the latest success story,” said Raj Nair, vice president of technology development at GLOBALFOUNDRIES. “This new RF SOI technology reaffirms our commitment to the RF market and is another example of how GLOBALFOUNDRIES can provide industry-leading levels of performance, reliability and scalability. 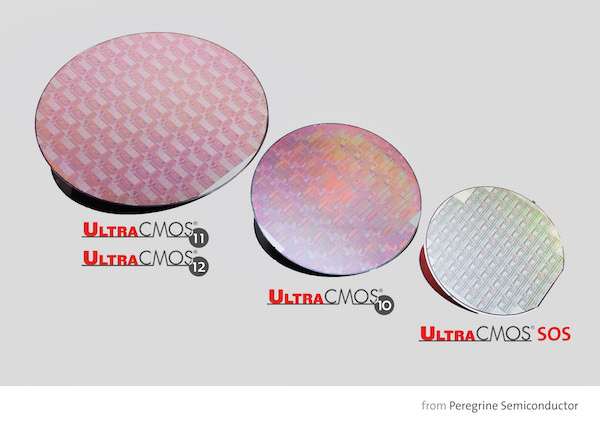 Peregrine Semiconductor Corporation, a Murata company, is the founder of RF silicon on insulator (SOI) and is a leading fabless provider of high-performance, integrated RF solutions. Since 1988 Peregrine and its founding team have been perfecting UltraCMOS® technology—a patented, advanced form of SOI—to deliver the performance edge needed to solve the RF market’s biggest challenges, such as linearity. By delivering best-in-class performance and monolithic integration, Peregrine’s product portfolio is the trusted choice for market leaders in automotive, broadband, industrial, Internet of Things, mobile devices, smartphones, space, test-and-measurement equipment and wireless infrastructure. A Murata company since December 2014, Peregrine holds more than 300 issued and pending patents and has shipped over 3.5 billion UltraCMOS units. For more information, visit http://www.psemi.com.