Power Supply in Package (PSiP) Uses a Unique Design Based on a Patented, Two-stage Architecture that Relies on Capacitors to Handle the Bulk of the Power-conversion Work

SAN ANTONIO – APPLIED POWER ELECTRONICS CONFERENCE (APEC) – March 6, 2018 – pSemi Corporation (formerly Peregrine Semiconductor), a Murata company focused on semiconductor integration, introduces the PE23300, the industry’s only fully integrated LED boost power supply in package (PSiP) based on a charge-pump, switched-capacitor architecture that offloads most of the power-conversion work from the inductor to capacitors in the charge pump.

Powering up to eight LED strings at a total power level of up to 10 watts, the PE23300 is designed specifically to power LED backlight arrays in ultra-high-definition (UHD) and high definition (HD) LCD panels for 2-cell and 3-cell narrow-voltage DC notebooks, industrial and automotive displays. 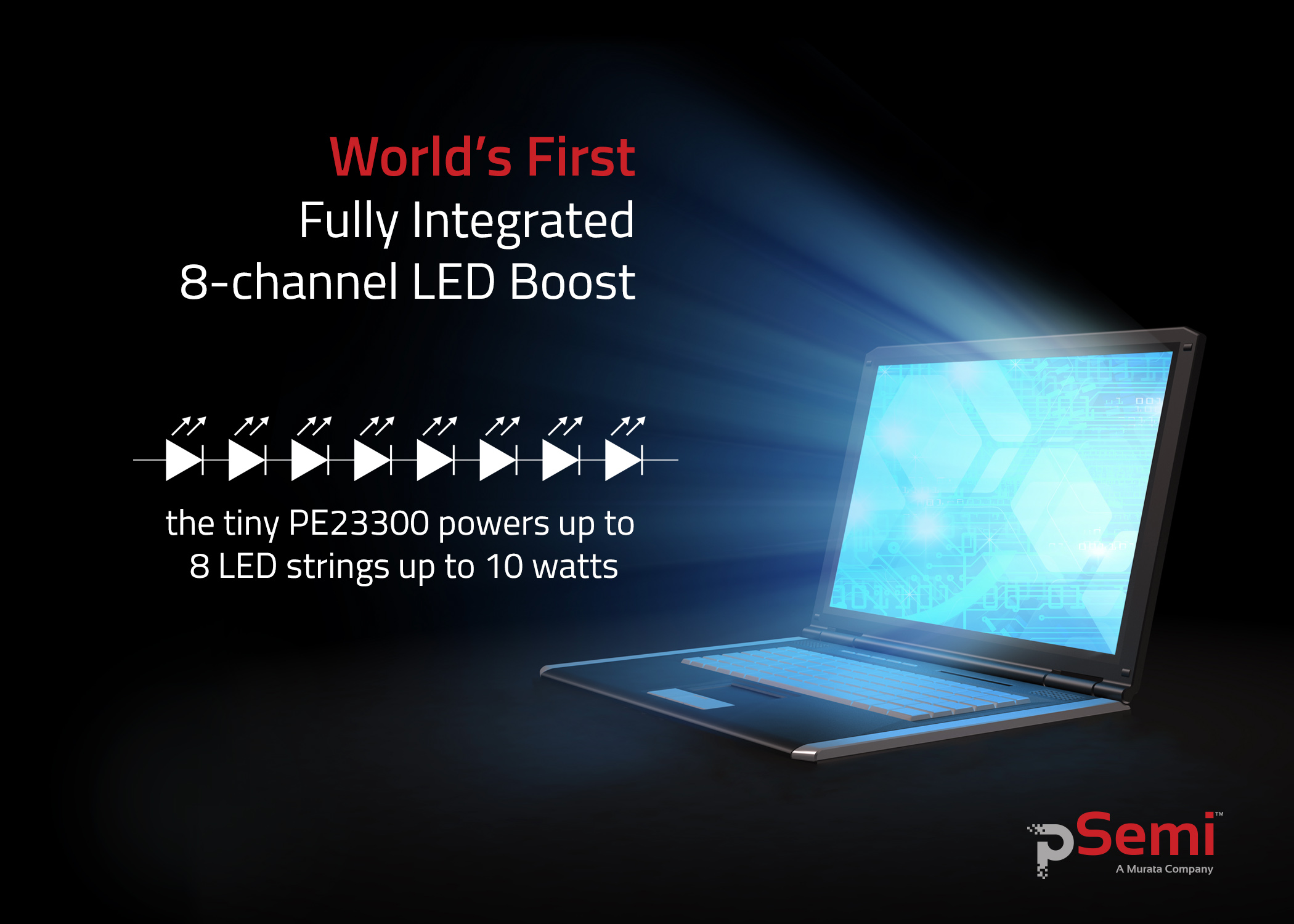 “The PE23300 truly demonstrates pSemi’s power-semiconductor capabilities. The PSiP delivers a unique, two-stage architecture that brings ground-breaking conversion efficiency and small solution size and is packaged with Murata’s advanced, 3D-packaging technology and passive components,” says Stephen Allen, director of strategic marketing at pSemi. “All components required for operation are integrated into a 7.7 x 11.7 millimeter laminate-based LGA package, which is just 1.6 millimeters in height. To achieve this small size, we used a ‘die-in-substrate’ 3D-packaging technology. The low profile is also a result of our two-stage architecture that allows us to use a tiny chip inductor. All of this can be achieved with an efficiency that is on average about 5 to 7 percent higher than the competition, halving the losses in the LED boost.”

Power conversion creates a compromise between size and efficiency: The smaller the solution, the worse the efficiency. This compromise impacts OEMs trying to make next-generation, ultra-compact products, because they need both a very high conversion efficiency and a very small size at the same time. pSemi solves this problem with a novel, two-stage architecture that offloads most of the power-conversion work from the inductor to a virtually lossless charge pump and relies on small, multilayer ceramic capacitors (MLCCs) to do most of the work. As a result, the inductor – usually the largest and tallest component – can be reduced dramatically in size, and traditional wire-wound inductors can be replaced with chip inductors. This patented architecture was first developed by Arctic Sand Technologies, an MIT spin-out acquired by pSemi in March 2017, and commercialized this year.

Beyond the smaller inductor and higher efficiency, this architecture delivers several other key benefits for LED boosts, including full short-circuit protection and a very flat efficiency over the entire load range. Also, efficiency is virtually independent of the output voltage, and this allows more LEDs per string. With fewer strings, efficiency is optimized, and the display-bezel size can be reduced in width. pSemi’s PE23300 features low power dissipation – up to half that of competing products – that improves reliability and supports portable applications’ extensive battery run times.

The PSiP provides full programmability via an I2C interface with settings stored in non-volatile memory or by using GPR pins. Dimming resolution is up to 12-bits resolution with an additional 3-bit dithering and can be either linear/logarithmic analog and PWM dimming or direct PWM dimming for maximum flexibility and resolution. The part features an LED brightness ramp up/down control with programmable ramp rate, linear/logarithmic ramp profiles and phase-shifted PWM dimming among active strings to minimize audible noise.

Manage Cookie Consent
pSemi respects your data privacy. This website, and third parties who may be located out of your country or location or region, use cookies to improve this website, to analyze the data traffic on this website, to help this website function properly, to connect with social media, to follow the surfing behavior across different websites and to offer the possibility to give feedback. For more information, please refer to our Privacy Policy.
Manage options Manage services Manage vendors Read more about these purposes
View preferences
{title} {title} {title}